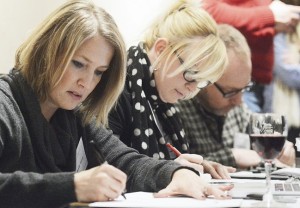 Creative York’s “Mad Art Dash” event will be held on Thursday, December 13th from 6pm until 8pm at the Creative York galleries. The Mad Art Dash (formerly called the Monster Drawing Rally) is a fundraiser for Creative York in which 25 artists live-create artworks in front of a roving audience in two 30-minute flash rounds. The resulting artwork is then sold during the event, and a portion of the proceeds goes to Creative York to help support their educational programming and award-winning community outreach.

This year the event is coming back to the Creative York gallery on Beaver St, where it was originally held for the first time in 2015. Each of the 25 artists participating will be challenged to create an artwork from start to finish during two 30-minute flash rounds. Each finished work will be priced at $35, and available for purchase on a first-come-first-serve basis.

Local celebrity artist and furniture designer Peter Danko will be creating a special live-painting, an on-the-spot watercolor portrait of the lucky winner of an on-line auction held prior to the actual event. Link to auction HERE.

If you’d like to see a peek of the mad, mad, mad fun we are going to have, here is a time-lapse video of the 2015 event (courtesy of artist J. C. Ayala), click HERE.

During the event, guests will also be able to view the two current exhibits in the galleries: “100 UNDER $100” in the Kerlin Gallery, featuring 100 artworks by 100 regional artists, all priced under $100; and in the same building, The Project Space gallery features “Some Assembly Required,” a solo installation exhibit by York artist Ophelia Chambliss. Purchases from the exhibits are welcome during the event.

Creative York is a non-profit organization dedicated to supporting the arts as a central part of the community through its outreach programs, children’s art education, and free art gallery exhibits. Creative York operates two beautiful galleries, art classes for all ages, and ceramics studios located in the heart of historic downtown York at 10 North Beaver Street, near Central Market. .