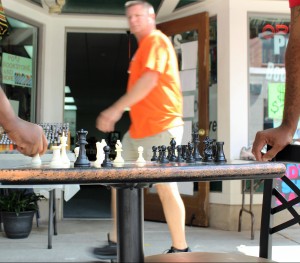 As a learner and lover of books, Po opened his bookstore in April, 2015, to be surrounded by books and other people who enjoyed them. He has made his new and used bookstore a true community center downtown. First, he started a reading program for children. Recently, he started a chess club.

Only three months old, the chess club already has 300 members. The youngest is 3, the oldest, 83! The chess club is free to join, free to play, and free to observe. Walk by on any day of the week during business hours and you’ll find one to four tables running outside of the bookstore. Po also offers free lessons to anyone who is interested in learning the skill of chess.

Po wanted to do something affirmative for the community, so he created this positive and peaceful environment that brings people together. Chess is the common ground for which the children and adult players learn life skills. Chess teaches you how to think a few steps ahead, consider your moves, but also the moves of your opponents. You improvise off of mistakes or surprises, and never break your concentration.

Po is focused on building this club, setting up a tournament this fall to crown a King or Queen of York, then challenging neighboring cities to tournaments. He is advocating for permanent chess tables placed in the city parks, with an ultimate goal of working with the school system to integrate chess into their curriculum.

Po’s Bookstore Chess Club is a Big Idea for York because it is a positive space that has the power to break down barriers; everyone in the community can come to learn from one another. 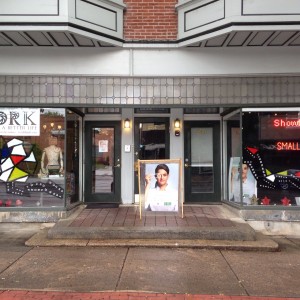 SMALL STAR is a unique art house proudly delivering independent, foreign language, and documentary films carefully curated for York. Its mission is to connect people to the world.

SMALL STAR is an intimate arts space with artistic and thought-provoking films alongside a gallery representing more than 55+ local artists, curated by YorkPAstuff’s founder Carmen Walsh. Screenings of important, cutting-edge, award winning films include casual meet-and-greet socials with beverages, locally made snacks, and art browsing in the gallery before and following the films.

In addition to the 28 shows booked thus far, Patti and Carmen have brought entertainment off the screen as well.

Local band Free Breakfast performed a mini concert at the venue ahead of the one-time showing of the June Carter family documentary, “The Winding Stream,” and the recent Wiener-Dog parade in conjunction with the theatre’s showing of “Weiner-Dog” was a big hit. Up next? A 10-session Film Appreciation Class beginning this fall.

SMALL STAR is a Big Idea for York because it is a unique venture that curates local art and global film culture. It is a space where stories, ideas, and culture interact in a rich and dynamic environment located in the heart of downtown York.

The WeCo Summer Series is the brainchild of David Smith, co-owner of I-RON-IC, an art boutique, coffee café, and home of the Pedi Cabs of York. David was hoping to bring positive attention to York City, specifically to the WeCo (West of the Codorus) neighborhood.

In July, organizers hosted a free birthday bash for York City’s 275th anniversary. They partnered with Wolfgang Candies to produce special candy bars for sale in stores around York. In the style of Willy Wonka, David, aka Mr. WeCo, announced that 250 of those candy bars contained a Golden Ticket, which granted the lucky winner and one guest a seat to the BBQ family-style meal at one long table stretching through WeCo. David collaborated with the York Rescue Mission, YMCA, and the Union Lutheran Church to gather and serve the food at this festive birthday party for our city.

Also through this Summer Series, WeCo resurrected the York City Yacht Club of the 1980’s. They worked with Big Brothers Big Sisters to form a mentorship program. The kids learned the skills to build remote control model boats that were raced during the August Creek Fire.

The WeCo Summer Series is a Big Idea for York because it involved an entire community, from the many people who organized each component, to the collaborators, to the attendees who enjoyed them. The programs brought a great deal of excitement to the community, and focused positive attention on the flourishing neighborhood of WeCo.

Anecdotal evidence, followed by market research, indicated that the York County Heritage Trust name was misleading for the community. People associated them with the Heritage Rail Trail, Historic York, and the Susquehanna Gateway Heritage Area, and many thought they were a financial institution. Following the lead of history organizations nationwide, the Board of Directors voted on a new name: the York County History Center. The rebranding process took over a year, and coincided with a decision to right-size the organization at the former Metropolitan-Edison Steam Generating Plant building on North Pershing Avenue. This move, projected to be complete by 2020, will establish a true History Center campus, with visitors parking once and enjoying the new museum along with the Colonial Complex properties (General Gates House, Golden Plough Tavern, and the Colonial Court House) just a block away. The new brand represents an interactive, accessible and unique museum experience, with bold storytelling that inspires visitors to return again and again.

The York County History Center’s Rebrand is a Big Idea for York because it positions the organization as more visitor centric. It makes York County history more accessible, and memorable, by offering York natives as well as visitors an opportunity to engage with York County history through “edutainment” experiences and unique, interactive storytelling.

Voting for the Big Idea open until Oct 27. Winner will be announced at the Creative York Awards on Oct 28.